Pioneers in the Tropics: The Political Organization of Japanese in an Immigrant Community in Brazil 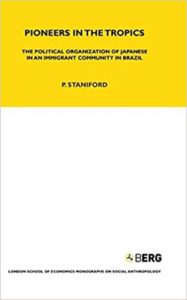 
This study of a substantial Japanese immigrant community in Brazil concentrates on its development of a political organization to cope with internal problems of co-operation and conflict and to deal with the outside world of Brazilian politicians and merchants. After many early troubles the immigrants developed pepper growing as a cash crop and now seem on the way to prosperity. The analysis, which makes use of the concept of network interaction, is of relevance to all interested in community migration and development of new rural settlements.