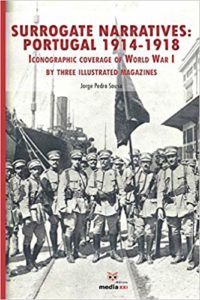 
In the 20th-century Europe, the first global traumatic event was World War I (1914 to 1918). The First World War was named by contemporaries the Great War and also the optimistic ‘War to End All Wars’. With estimated losses of ten million soldiers and seven million civilians, along with a colossal number of wounded and mutilated, physically and psychologically, this mega-event ruined Europe, caused the end of the Eurocentric world and led to ideological crisis, paving the way to Communism, Nazi-Fascism and other Authoritarianisms.World War I also triggered important developments in communications and propaganda. In addition to the armed dispute, World War I was a symbolic battlefield for social communication. The media were used for propaganda purposes, for contenders to persuade others and persuade themselves of the justness of their cause, stirring the struggle.Illustrated magazines had a significant role in war propaganda, because they allowed people to ‘see’ the war and also because pictorial communication and propaganda had been recognized as a powerful ally in easily spreading complex messages, such as justifying the war to the people, helping to promote recruitment into the armed forces or convincing the population that their sacrifices would be rewarded, besides sustaining the morale and demoralizing the enemy.This book describes and compares the iconographic coverage of World War I made by three illustrated magazines circulating in Portugal between 1914 and 1918 – Ilustração Portuguesa (Portuguese Illustration), Portugal na Guerra (Portugal in the War) and O Espelho (The Mirror) – and attempts to clarify the reasons presiding the respective discourses. It summarizes three independent and deeper researches about each of those magazines.