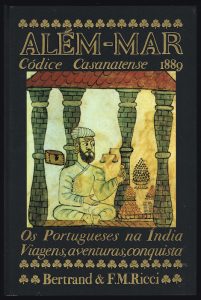 
Work with introduction by Fernand Braudel of the French Academy. Texts by G. Guadalupi, C. R. Boxer, R. Barchiesi.
Illustrated in the text with colored engravings, reproducing 16th century maps of India, and with the photographic reproduction of the manuscript, printed on long linen paper.
Copy of 1862/2000 copies with the following justification: “This edition was printed in Milan, Italy, by Franco Levi under the direction of Franco Maria Ricci, in September 1987, in Bodoni characters. Handmade paper was specially manufactured by Pietro Miliani, in Fabriano. 2000 copies numbered in Arabic characters were printed ». The texts were printed in two columns, namely the text by Charles Raph Boxer, with 12 pages, entitled: The Portuguese Empire in the East in the 16th century. The Codex Casatenense consists of engravings with images that show the Portuguese and the natives in the East with their uses, customs and costumes, portrayed in the sixteenth century.